GRIDSPACE was mandated to conceive and produce an audio-visual experience at the main square of Meraas’ City Walk, titled Place des Lumières. We worked alongside XYZ Cultural Technology and Fly Studio combined expertise for this ambitious project commissioned and managed by Float4.

Meraas’ City Walk was the largest-scale multimedia project of 2016 in Dubai, and was featured in the 12 influential immersive environments completed in the last 12 months, by SEGD AWARDS 2017.

Inspired by Jules Vernes’ Voyage au centre de la terre, Voyage into Sound begins at the center of the earth, where the first beat is heard. The fountain arms create a volcano from which a 3d character rises, weightless. The spectators follow the character as he floats upwards, guided by sound waves and the evolution of the musical score.

This project reflects our ambitions, inspirations, and dreams. It is a manifestation of a distant future that is shaped by our collective imagination.

The immersive digital experience cover an aggregate canvas of over 680,000 ft2, the equivalent of 12 football fields, creating a luxury tourist and consumer destination of unparalleled ambition.

Our goal is to immerse the audience into a constantly moving, all-encompassing environment. 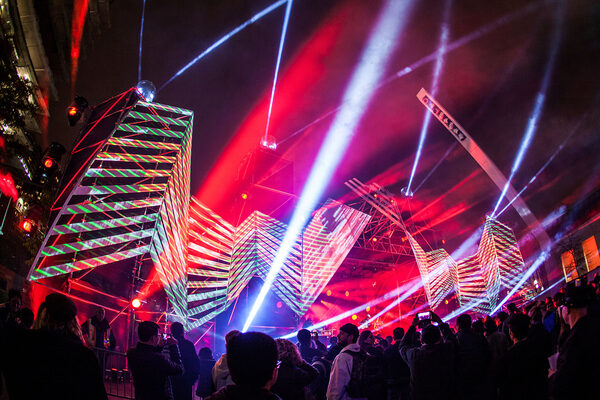